33 passion groups from 13 European countries participated in this year's Europassion meeting in Tullins. 170 participants enjoyed the weekend; A photo report of the meeting can be found at
europassion_in_tullins_e.pdf 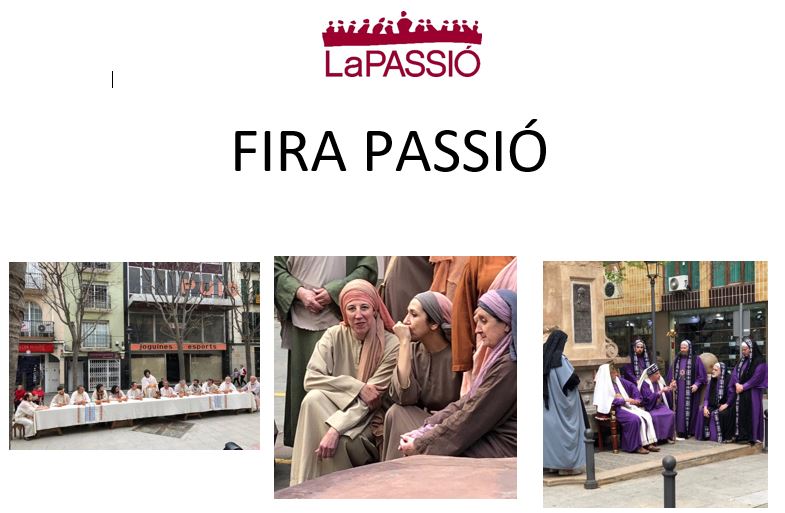 From 16 to 17th, February, 2019. We will leave the theatre and take La Passió to the street. We invite you to come and, if you want, perform a scene of your passion play in the streets of Esparreguera 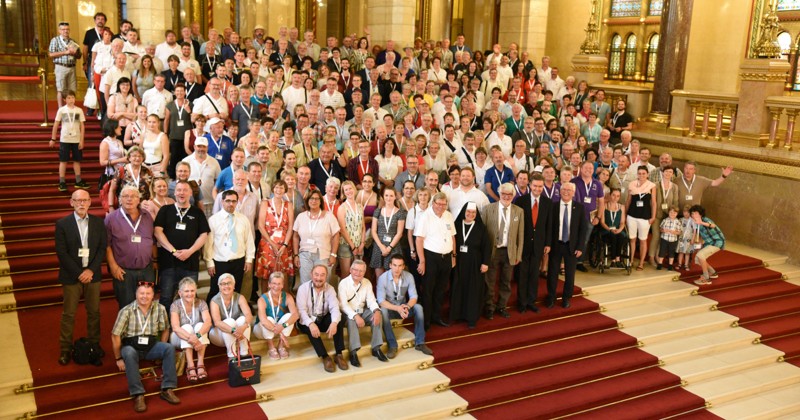 40 passion groups from 13 European countries participated in this year's Europassion meeting in Budaörs. 297 participants enjoyed the weekend; A photo report of the meeting can be found at

budaors_e.pdf
Catalan Federation of Passions - Presentation of the 2018 Season 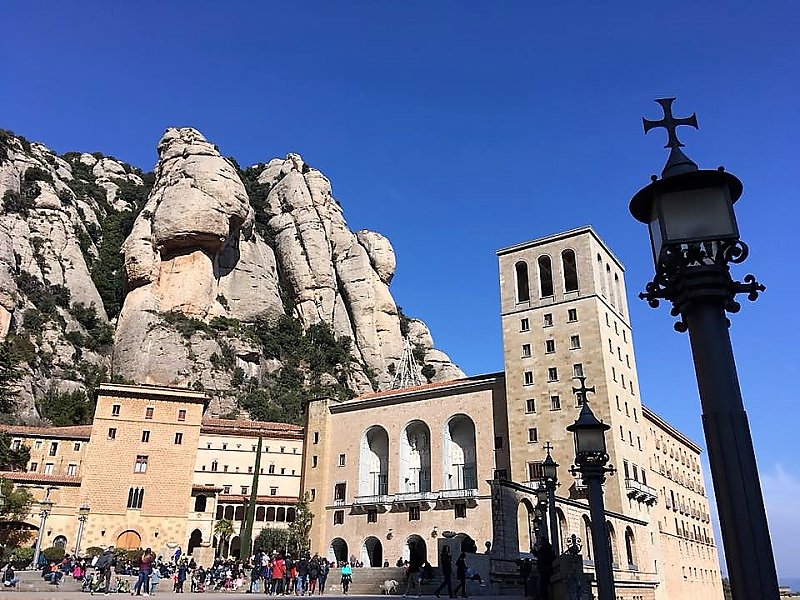 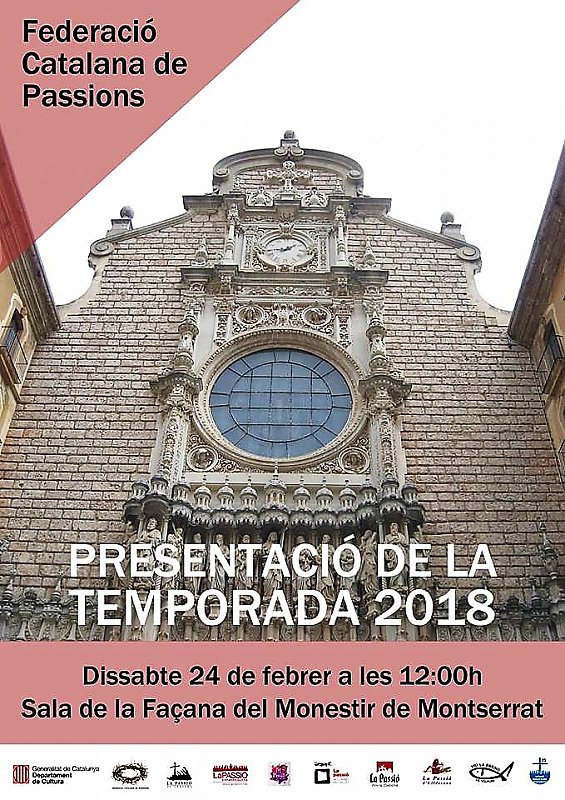 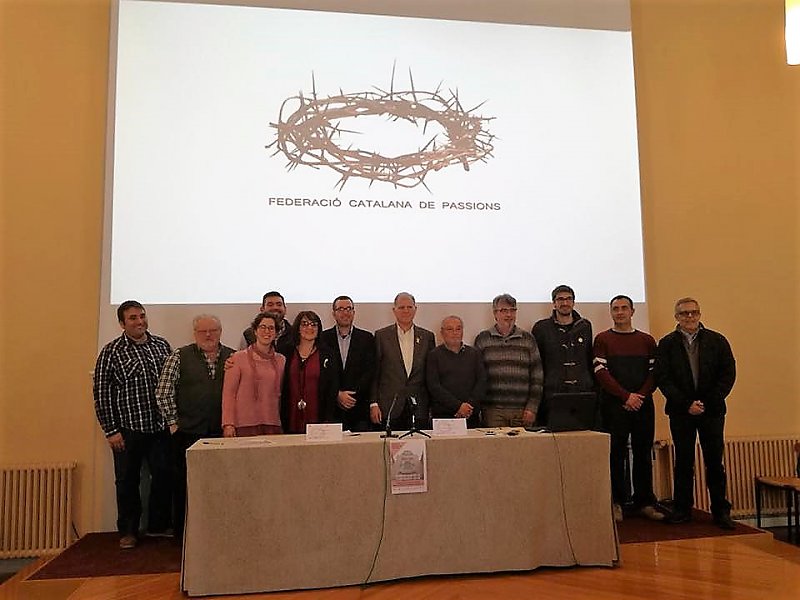 On February 24, the press conference to present the Season of Passions 2018 took place in the hall of the Montserrat Monastery Facade. The eight Catalan Passions that are part of the Catalan federation informed about the new changes for the Season.

Europassion 2017 in Kecskemét (Hungary) 08.06. - 11.06.2017
The 33rd International Congress of Europassion has as focus the memory of the 500th anniversary of the Reformation. Further visits are planned in the Great Hungarian Plain and in the city of Kecskemét. Kecskemet is home to 110,000 people, the eighth largest city in Hungary and is situated 80 km south of Budapest.

The theater Katona József Kecskemét has set itself the task to present the Passion of Jesus Christ on an outdoor stage. The extraordinary thing about the performance in Kecskemét is that the Passion from the aspect of the Hungarian Pauline is shown.

Highlights of the friendly encounter was the joint visit of the passion play and a reception for all participants and guests of the meeting.

Six passion groups have created the Catalan Federation of Passion Plays after a ten-year gestation
They are the passion groups of Cervera, Esparreguera, Molins de Rei, Olesa de Montserrat, Ulldecona and Vilalba dels Arcs. The Federation is born to promote these traditional Holy Week plays and to spread the theater culture and its social aspect all over our country. One of the next steps of the organization is to carry out joint actions and to encourage new members to join.

Vilalba dels Arcs, February 27th,2016 – Today at noon, the village of Vilalba dels Arcs, in Terra Alta, has hosted the presentation of the Catalan Federation of Passion Plays. This association brings together six of the most important passion groups of Catalonia. Its main target is to promote these traditional passion plays of our country and also the theatre culture during the Holy Week. The presidents of the six federated passion plays have attended the event as well as other theatre group members and local and provincial politicians.

The Catalan Federation is formed at present by the passion groups of Cervera, Esparreguera, Molins de Rei, Olesa de Montserrat, Ulldecona and Vilalba dels Arcs. However, other passion groups have already requested to join it, according to Josep Cuscó, president of La Passió d’Esparreguera and of the new Federation. The doors are open for them and they will be invited to the next general assembly where they will be informed about how to become a member.

Nowadays in Catalonia, there are more than 30 passion plays of several formats and lengths, some of them tracing back to the fifteenth century. In these plays, innovation and tradition merge into original and surprising performances in big theatre buildings, small spaces or even outdoors, taking advantage of natural stages.

Cuscó has explained that the main target of the federation is to create synergy between the members and taking advantage of this human potential in order to promote themselves together. Some planned actions are the creation of an advertising spot, technical collaboration and experiences exchange. Passion plays are not only theatre or religion performances but also a social movement which brings together children, youth and adults, and therefore different ways of thinking and ideas. All of them work together towards the same goal. Isidre Sampe, president of La Passió de Vilalba dels Arcs, has pointed out the importance of the values and of all the people that enable these plays.

Ferran Bladé, culture manager of the regional services in Ebro lands, congratulated the drivers of this initiative and emphasized that passion plays are a clear example of the great cultural wealth of our country. He thanked them for their work, their effort and their will of collaboration.

Finally, Marc Sampé, head of communication of La Passió de Vilalba dels Arcs, has announced that a website for this Catalan Federation is being created. The organization will also be present on Facebook and Twitter in order to inform about the actions organized by each passion group as well as the joint events.

The direction board of the "Federació Catalana de Passions”

The direction board positions and the president will change every two years among the members of the federated passion groups. At present, it is formed as follows:
The origins of the federation: a decade of gestation

On June 4th 2005, the first meeting of Catalan Countries Passion took place in Esparreguera, due to the nomination of Esparreguera to be Capital of Catalan Culture 2005. Twelve passion groups put together Passió de Passions, a joint play in which all the groups performed a scene of their passion play.

After this event, the idea of creating a federation of Passions emerged. Although it was not until April 28th 2008 that a meeting was held in Reus in order to prepare the foundation of the federation. The volunteer character and some financial troubles of our passion plays in the last years have elongated the process of creating the Catalan Federation of Passion Plays. However, the process finally ended in Olesa de Montserrat on November 21st, 2015.